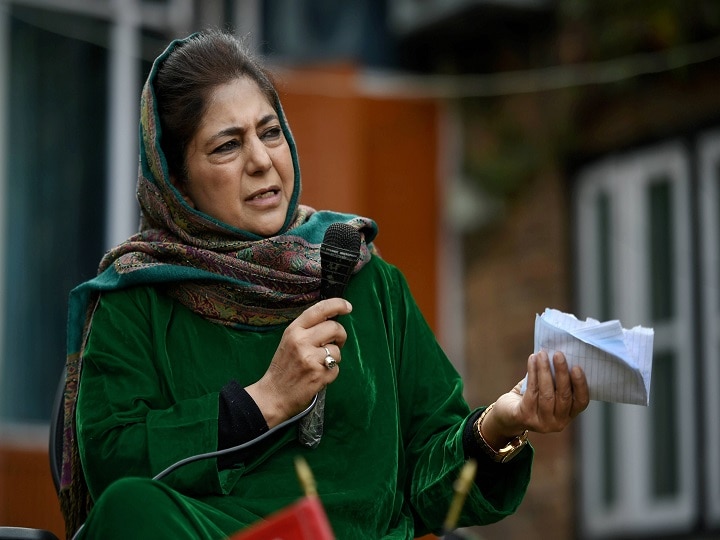 New Delhi: The Jammu and Kashmir BJP demanded the arrest of PDP chief Mehbooba Mufti accusing her for “disrespecting” the national flag. This comes after the release of the former chief minister of the newly formed Union Territory. Mufti, after being released from 14-month detention, was interacting with the reports where she said that she will only hold the tricolour after the erstwhile flag of the state of Jammu and Kashmir is restored. ALSO READ | “Won’t Raise Any Other Flag Till Article 370 And J&K Flag Brought Back”: Mehbooba Mufti

Reacting to the remarks of the former chief minister, Union Minister Ravi Shankar Prasad said that what she said is the “downright denunciation” of the national flag’s sanctity.

“Her comments that she will not hold the tricolour till the Kashmiri flag is restored is “downright denunciation” of the national flag’s sanctity”, senior BJP leader Ravi Shankar Prasad said.

Union Minister Ravi Shankar Prasad questioned the silence of the so-called secular lobby at this anti-national remark. There can be nothing more objectionable, said Prasad.

Prasad asserted that Article 370, which gave the erstwhile state a special status and was revoked last year, will not be restored. It was removed following a proper constitutional process and both Houses of Parliament approved it with overwhelming numbers, he said.

Revoking it was our commitment to the nation and people have appreciated it, he said. In many ways, Mufti has shown serious disrespect to the very image of India which the tricolour represents, he added.

The minister also targeted at other opposition parties, saying they have maintained a stony silence at her remarks showing serious disrespect to the national flag, even as they criticise the saffron party at the “slightest of issues”. “This is hypocrisy and double standard,” Prasad said.

He claimed that the revocation of the Article 370 has led to increased development in the union territory with the weaker sections of society, like SCs, STs, OBCs and women, enjoying the same rights that they do in the rest of the country. People participated in local polls in Jammu and Kashmir with joy and happiness, he said.

“Some people and families who used to rule with impunity and without accountability are going to have problems,” he said. Article 370, which gave Jammu and Kashmir status of special state, was abrogated last year on August 6 as a part of BJP’s poll promise in Lok Sabha Elections in 2014.

Explained: Kashmir, India and the OIC