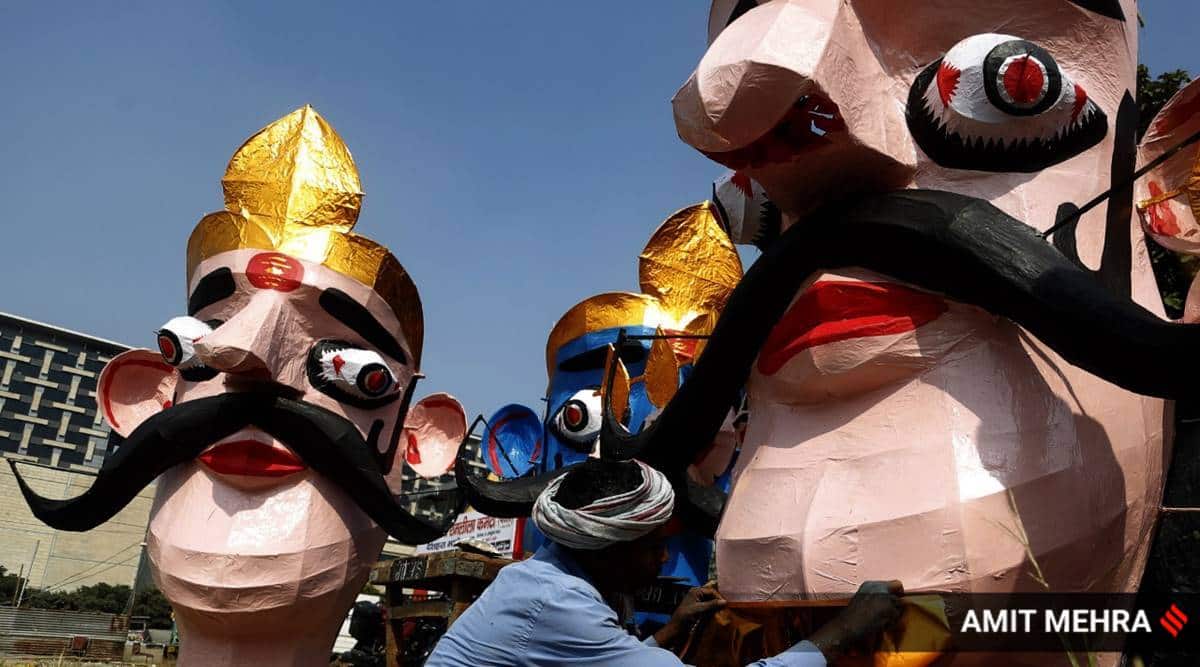 Dussehra 2020: Effigies of Ravana being made at Ramlila ground, Surajmal Vihar, East Delhi

It’s a day before Dussehra and Karan ‘Ravan Wala’ looks disconsolately at the empty stretch of pavement, the handful of in-the-works effigies underscoring the despair of a festive season that is like no other he remembers.

“You couldn’t set foot on the sidewalk, there used to be so many of us over this one kilometre stretch,” Karan said on Saturday, looking at the cars crossing by without a second glance as his hands expertly give shape to long sticks of bamboo.

Hundreds of artisans like Karan who made effigies of demon king Ravan, his brother Kumbhkaran and son Meghnad every Dussehra would earn enough this season to see them through the entire year. Not this time though with COVID-19 continuing its spread and fear of contracting the disease keeping most people away from festivities.

The stretch of Najafgarh Road near the Tagore Garden metro station in west Delhi would buzz with activity at this time of the year with sellers making last-minute touches to the bamboo mannequins and buyers lining up to pick up their orders. Now, only three or four effigy makers work on a few under-construction puppets.

The colourful bamboo and paper effigies are sold to Ramlila organisers across the city for prices ranging from Rs 1,000 to Rs 30,000. However, most organisers decided to not celebrate Dussehra this year, knowing the crowds would not come and also because of strict government rules.

It’s about the pandemic but also about stricter rules for pavement hawkers and the ban on the use of firecrackers–the effigies go up in a blaze to signify the age-old battle of good vs evil; the demons are vanquished by Lord Ram who traditionally fires an arrow at the puppets. This year, that tableaux played out in parks and grounds across north India will happen in just a few places.

“In the last two-three years they have entirely killed our work. First they denied us a place to make and sell effigies, then they put a ban on firecrackers, and now this disease,” said 52-year-old Karan who works as an electrician at other times of the year. Sitting amid coloured papers, oil paint, long metal wires and thin stripes of bamboo, 34-year-old Shammi Painter echoed Karan’s despondency.

Shammi said he left it all to fate when he decided to take the risk of making effigies this year.

“The market is dead. We are getting only 10 per cent business of what we used to make two-three years back. This year, I have orders for 10 big and 10 small Ravans and that’s it,” he said, as he gave finishing touches to the long black moustache of a bright pink Ravan.

The painter said proudly that he would get orders from Ayodhya till a few years ago. Now he focuses more on making wall paintings in schools, gyms and houses.

“Those were different days when we could survive the year solely on Dussehra earnings. Now I cannot sit idle a month later,” he said.

Anil Pandey, 42, who has been making the bamboo mannequins for over 30 years, said he is better off even if only a bit.

Working laboriously on finishing the only effigy order he has received, Pandey is more enthusiastic than his other colleagues on the pavement. The father of two supplies biers and shrouds for last rites throughout the year.

“I will be able to make a profit this year, that’s more than I could ask in such times,” said the proud owner of a two-storey house in Rajouri Garden.

Talk about involving the future generation and pat comes his reply. “Not a chance.”

“This is a once-a-year thing. What will they do for the rest of the year? I want them to study and become officers. They take interest in this work but I don’t want them to come near it,” he added.

Leading out of Najafgarh Road on a narrow road lined by makeshift offices of marriage music bands, on a narrow road are houses where the effigy makers stay. A bright blue three-feet Ravan occupies pride of place outside a house, but that is only a sample of what is inside.

The house, which also doubles up as a workshop, belongs to New India Ravan Wale and has seen artisans painstakingly make thousands of effigies over the last 80 years. Not so long ago, their effigies even found takers in Canada and Australia.

“Now we are doing it because there is nothing else we can do,” said 45-year-old Ajay Saraswat.

Saraswat’s grandfather had learned the craft from ‘Ravan wale baba’, reportedly the first one who established the area as an effigy market.

From the ground to the top floor, the space is cluttered with large and tiny pieces of bamboo sticks, bowls filled with homemade glue, long wires to tie the parts together and stacks of paper to make the outer structure.
The work, indeed craft of making the mannequins only to have them go up in flames, gave livelihood to four generations of his family but the business may not last another generation, said Ajay’s nephew Amit Saraswat.

“This is all we know, I don’t want my children to take up this work,” Amit said.

“It is up to him what he wants to do. He loves to sing so if he wants to become a singer we will support him,” she said pointing to their six-year-old son busy watching a music video on a smartphone.

For all the latest Lifestyle News, download Indian Express App.

NREGS demand still on rise: 96% of the panchayats have applicants

Trinamool Minister Likely To Be Volunteer For Covaxin Trail In Kolkata

From 26/11 to Covid, meet ‘warriors’ who defeated every problem

Tourists Strolling Around Without Masks to be Photographed, Fined, Says Panaji Mayor

‘Christmas Will Not be Cancelled’, Says Bethlehem Amid Little Comfort or Joy