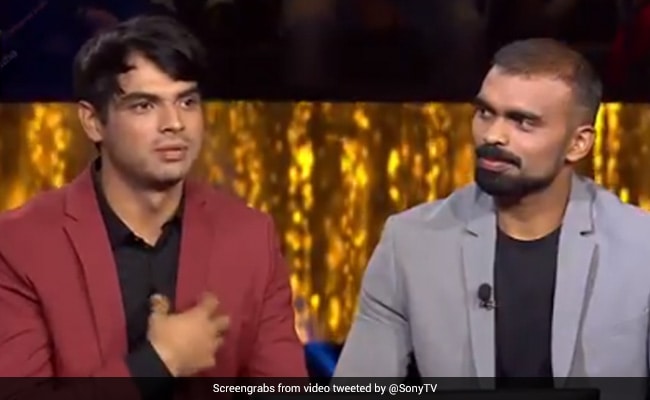 Before starting the quiz, a montage of clips from Neeraj Chopra and PR Sreejesh’s Olympics performances was played on screen and by the end of it, Amitabh Bachchan and two medallists were in tears. The montage also made the audience emotional and gave them goosebumps.

An excited Big B asked Neeraj Chopra and PR Sreejesh if he can touch their medals. When the duo obliged and handed the medals to him, the actor hilariously said: “Nahi nahi pehnunga nahi (no, no, I won’t wear it)” and added: “Apne neeji jeevan mein isko pehenne ka afsar milega nahi, ek baar choo le bus, yahi bahut hai humare liye.”

Later, Big B, on a fun note, shared a photo of PR Sreejesh, who hails from Kerala, that featured him dressed as a Sardar. PR Sreejesh shared the story behind the picture and said that there are so many players from Punjab in his team that he has also started using Singh as his surname to promote unity in the team.

On the show, Amitabh Bachchan also got some lessons in Haryanvi from Neeraj Chopra, who is from Haryana. The gold medallist made Big B repeat some of the famous Hindi dialogues in Haryanvi and the results were hilarious. When Amitabh Bachchan asked Neeraj Chopra to say a verse from his song Yeh Kahan Aa Gaye Hum – Main Aur Meri Tanhaai Aksar Yeh Baatein Karte Hain, Tum Hoti To Kaisa Hota – from his film Silsila in Haryanvi, Neeraj’s ROFL take on the track left Big B and PR Sreejesh in splits.

Neeraj shared that he chose javelin because when he was 13, he was “overweight” and his uncle insisted that he should pursue a career in sports. His uncle sent him to a stadium to get inspired by other sportspersons and Neeraj, who was clueless about which sport he should start pursuing back then, saw players practicing javelin at the stadium. He liked the sport and decided to pursue it. He also showed some techniques of javelin to Amitabh Bachchan.

Talking about the sacrifices his father has made so that he can have a bright future in sports, PR Sreejesh got emotional. He also recalled how he vowed to win a medal for team India at the Olympics after his team was badly treated when they lost all their matches at the London Olympics in 2012. In one segment of the show, Amitabh Bachchan also played hockey with PR Sreejesh and even scored a goal.

Neeraj Chopra and PR Sreejesh won Rs 25,00,000 on the show. The duo have pledged to donate the money for a social cause.

#The Sabarimala temple in Kerala is situated inside which forest reserve?

#Hind Kesari and Maharashtra Kesari are championships related to which sport?

#The international hockey stadium in Mohali, Punjab is named after which Indian hockey legend?

#On December 25, 2019, the Indian Railways launched which new train service that is fully equipped with Vistadome coaches?

Nothing is certain but want to stay with this team till Paris Olympics: PR Sreejesh

One Thing That Scares Olympic Medallists? Find Out In This Rapid Fire Round

How Much Cash Reward Did Neeraj Chopra Get after Winning Gold Medal at Tokyo Olympics?