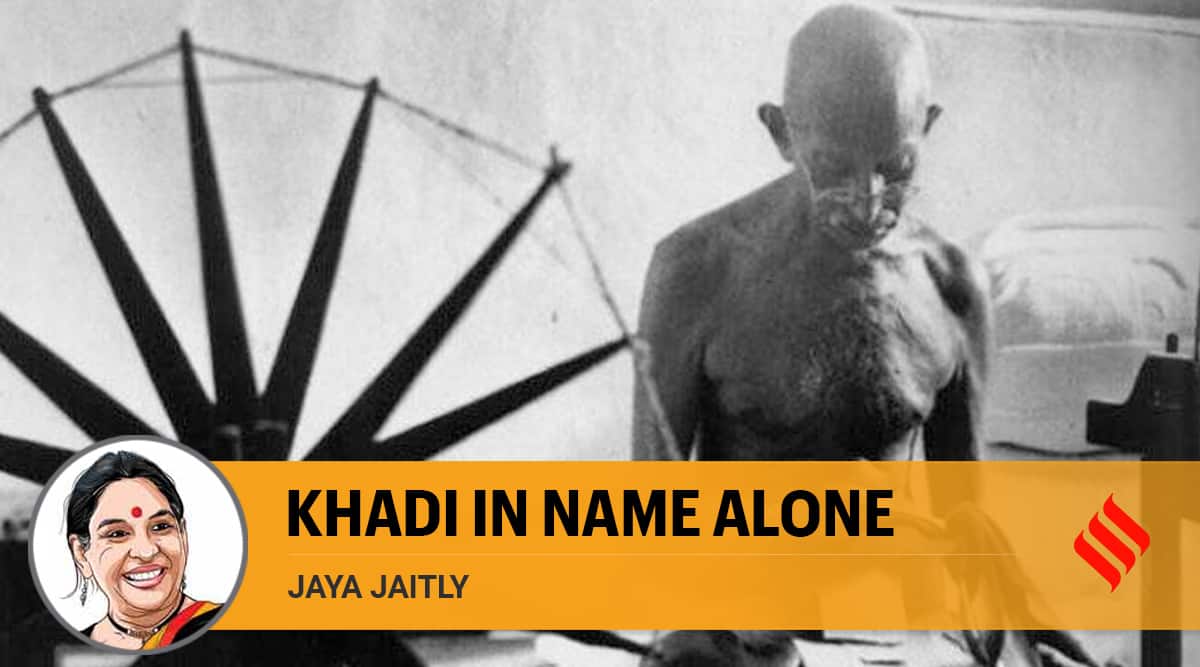 In a Mann ki Baat broadcast in 2019 and another last Sunday, the Prime Minister stressed his support for khadi, cottage industries, crafts and handlooms. First, he urged people to buy rakhis made of khadi for Raksha Bandhan, and this time to buy khadi products generously during the coming festive season, starting today, to honour Mahatma Gandhi. The PM conveys what is on his mind. Government bodies, it is presumed, should listen carefully and follow through, otherwise his words are just wishful musings. The khadi rakhis were not seen in any khadi store a few days after the broadcast because even the staff had no idea why anyone should expect them to be available.

It is all very well for us to invoke Gandhi’s name and bring up nostalgic images of him spinning the charkha and wearing simple khadi cloth. Millennia ago, the regions covering India, Bangladesh and Pakistan already wove khadi or what is commonly known in rural areas as “khaddar” on home-owned simple looms. Gandhi took to the use of the word khadi when he was still in South Africa, and fine-tuned it into a politically symbolic term in India. Genuine khadi or khaddar is woven from short-stapled organically grown cotton. The beauty is in its uneven texture and colours, as cotton bolls are not all pure white in every region. Fabrics being made today in the name of khadi are modified spin-offs that look more like handloom fabric, with mill-produced yarn, screen printed and often mixed with mill-made polyester. Khadi’s original charm and the signatures of its true identity are being lost. In many cases, it is a bit of a con-game to call it khadi anymore.

What is even more unfortunate is the fact that the Khadi and Village Industries Commission (KVIC), within the Ministry of Small and Medium Industries, is enabling a strange form of corporatisation. A paper by the “Unlock Khadi” campaign of the Centre for Public Policy Research says, “According to the Khadi Mark Regulations (KMR) of 2013, no textile can be sold or otherwise traded by any person or institution as khadi or a khadi product in any form if the khadi mark tag issued by KVIC is missing. This restricts the scope of trade to a few approved entities, thereby creating recognisable barriers to enter the market for khadi. The certification process described in Chapter V (Clause 20 (a)) of the KMR requires accredited agencies to perform an on-site verification of hand-spinning and hand-weaving processes.” Yarn must be procured only from KVIC depots or the Cotton Corporation of India, descriptions of mechanisation and electrification are ambiguous. There are so many restrictions that most producers have no incentive and many small bodies are unable to pay Rs 50,000 for certification. It is shocking that KVIC has filed more than 1,000 cases against establishments for using the word “khadi” even as a part of a descriptive sentence. KVIC may wish that fabric that has not been hand-spun or handwoven should not be passed off as khadi but in many cases the certification process itself creates a problem.

There are two other factors that allow for multiple authorities and confusion. Hand-spinning and weaving are also part of craft skills. Only the hand-spun part is additional in khadi . But today KVIC, on its website and in its catalogue, has visibly non-hand-spun silk -printed saris, polyester fabrics and others which seem clearly machine-printed. The khadi mark can be obtained for the polymer and chemical-based industry (PCBI), the leather industry, non-edible oils and soap industry, the cottage match industry, and — horror of horrors — the plastic industry. These may indeed be grameen udyog but how do they get the “khadi” brand label when they are not khaddar? It seems to be forgotten that it’s Khadi and Village Industries. They are separate entities. Worse, the KVIC online catalogue has products like industrially-made suitcases, bags and wallets which are under MSME, but why with a “khadi” label?

Additionally, mediocre embroideries, Kohlapuri chappals and many other products are equally under the Ministry of Textiles. Why can’t khadi and all handicrafts be together in one ministry?

The idea of khadi was for all citizens to produce it freely and wear it proudly. Gandhi did not intend to create a police state for the khadi sector, full of acts and rules that put production in a straitjacket. Perhaps, some courageous producers can try circumventing all this by using the word “khaddar” on their labels instead.

This column first appeared in the print edition on October 2, 2021 under the title ‘Khadi in name alone’. The writer is founder/president, Dastkari Haat Samiti.