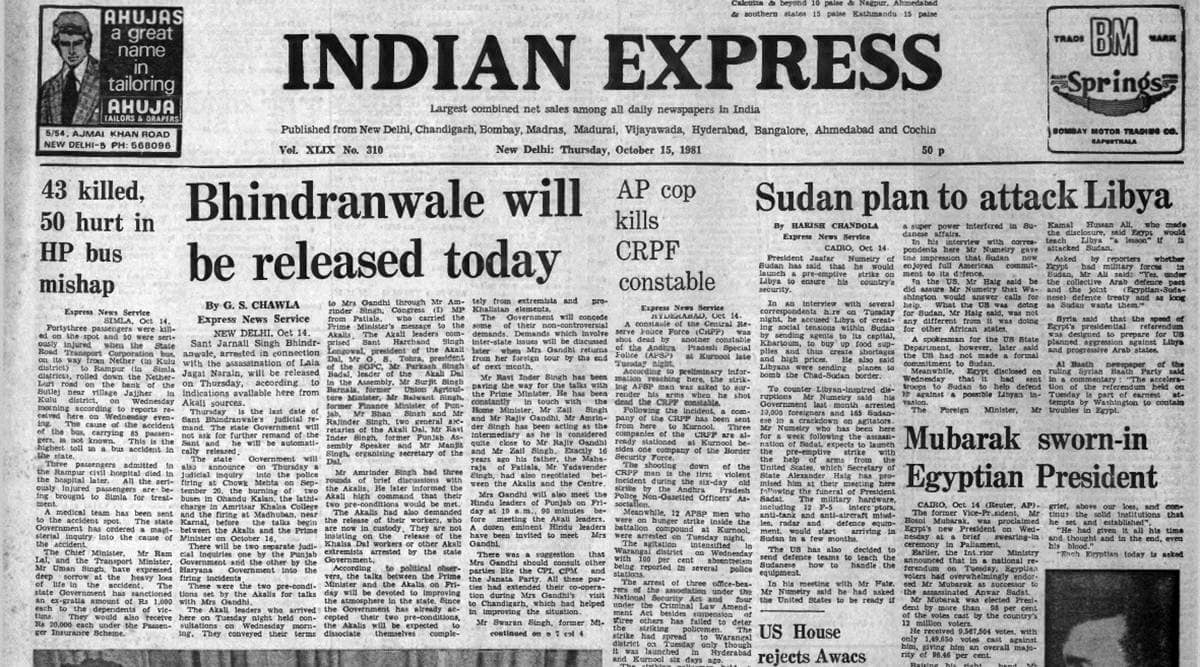 Sant Jarnail Singh Bhindranwale, arrested in connection with the assassination of Lala Jagat Narain will be released on October 15, according to Akali sources. The state government will also announce on October 15 a judicial inquiry into the police firing on Chowk Mehta on September 20, the burning of two buses in Ohandu Kalan, the lathi charge in Amritsar Khalsa College and the firing at Madhuban, near Karnal before the talks between the Akalis and Prime Minister Indira Gandhi begin on October 16. There will be two separate judicial inquiries — one by the Punjab government and the other by the Haryana government — into the firing incidents. These were the two pre-conditions set by the Akalis for talks with Mrs Gandhi. The Akalis, who arrived in Delhi on October 13, conveyed their wishes to the prime minister through Congress-I MP from Patiala Amrinder Singh.

A constable of the Central Reserve Force (CRPF) was shot dead by another constable of the Andhra Pradesh Special Police (APSP) at Kurnool on October 13. According to preliminary information received at Hyderabad, the striking APSP man was asked to surrender his arms when he shot dead the CRPF constable. Following the incident, a company of the CRPF was sent to Kurnool from Hyderabad. Three companies of the CRPF and one of the BSF are already stationed at Kurnool. The shooting was the first violent incident during the six-day-old strike by the Andhra Pradesh Non-gazetted Officers Association.

Former Vice-President of Egypt, Hosni Mubarak, was proclaimed the country’s new President on Wednesday at a brief swearing-in ceremony in the parliament.