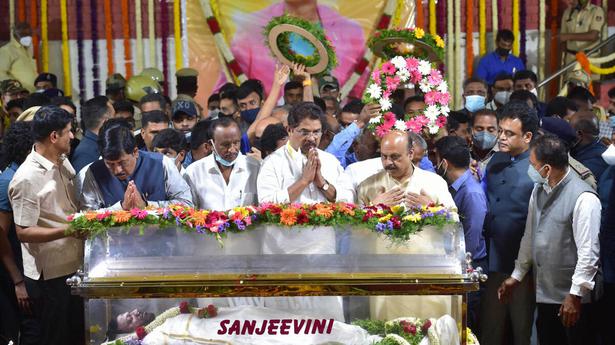 Puneeth Rajkumar, 46, one of the marquee names of the Kannada film industry and the youngest of the five children of matinee idol Dr. Rajkumar, passed away after suffering a cardiac arrest on Friday morning.

Puneeth complained of chest pain after a workout session at the home gym on Friday morning. An ECG at his family doctor’s clinic indicated a cardiac arrest and he was immediately rushed to Vikram Hospital, but it was too late, sources said.

Fans queue up to pay their last respects to Puneeth Rajkumar at the Kanteerava Stadium, in Bengaluru, Friday, Oct. 29, 2021.
| Photo Credit: PTI

Dr. Ranganath Nayak, cardiologist at Vikram Hospitals, said at the time of arrival to the emergency, the patient was unresponsive. “Immediate advanced cardiac life support measures were initiated at the hospital for resuscitation. However, the patient continued to be unresponsive… The panel of medical experts extended all efforts to save him. He was declared dead at 2.30 p.m.,” he said.

Kannada actor Puneeth Rajkumar passed away on October 29, 2021. He was 46-years old.

Seen here is Puneeth Rajkumar with his parents and actor Amitabh Bachchan. As a child artiste, Puneeth then known as Lohith, won the National Award for his role in Bettada Hoovu.

Puneeth Rajkumar was just six months old when he faced the camera in the thriller Premada Kanike. He went on to act in as many as 14 films as a child artiste.

Actor Puneet Rajkumar being greeted by his fans during the shooting of a film at Karnatak University campus in Dharwad. Popularly known as ‘Power Star’ and fondly called as ‘Appu’, Puneeth was also a producer. He was considered ‘ahead of his time’ for the films he produced under his home banner Puneeth Raj Kumar Films.

Actor Puneeth Rajkumar with the students of Mathura School for the Blind. The actor has donated his eyes.

Puneeth is the youngest child of producer-distributor Parvathamma Rajkumar and legendary Kannada actor Rajkumar. Also seen here are his brothers Raghavendra and Shivarajkumar. Puneeth has two sisters Lakshmi and Poornima.

Puneeth (centre) with his brothers Shivarajkumar and Raghavendra at the release of a book on their father Dr. Rajkumar ‘The Person Behind the Personality’, in Bengaluru on June 2, 2012. Both his brothers are also actors.

Actor Puneeth Rajkumar during the inauguration of the sixth edition of the Karnataka Premier League (KPL) Twenty20 Championship at the M. Chinnaswamy Stadium in Bengaluru on September 01, 2017. He was the brand ambassador of IPL team Royal Challengers Bengaluru.

Puneeth with actor Rajnikanth at the 60th birthday celebration of actor Ambareesh at Palace Grounds organised by Kannada Film Industries, in Bengaluru on May 29, 2012.

Puneeth Rajkumar is married to Ashwini and the couple has two daughters. They are seen here after casting their votes for Lok Sabha election at Poornaprajna High School, Sadashivanagar, in Bengaluru on April 17, 2014.

Puneeth Rajkumar taking part at shooting of film Dodmane Huduga in Chitradurga. He has acted in about 30 Kannada movies as a lead actor, with Yuvarathna being his latest movie.

As a child artist

Puneeth made his debut on screen with his father when he was just six months old and he went on to win a national award as a child artist. He took a break only to re-emerge as a lead actor in 2002 and went on to star in 29 films as a lead actor, delivering some of the biggest hits in recent years.

He is survived by his wife Ashwini Revanth and daughters Drithi and Vanditha. His brother Raghavendra Rajkumar, appealing for calm among his fans, said the family was yet to come to terms with the loss. Family members, members of the film industry, and scores of fans were inconsolable at the sudden demise of the actor. “He was at the party celebrating my birthday on Thursday night, singing and dancing merrily and to realise he is gone today is unbelievable,” said music composer Guru Kiran.

The mortal remains of the actor have been kept at Sree Kanteerava Stadium in Bengaluru where fans and well-wishers can pay their respects all day on Saturday. There was a huge crowd of his supporters at the venue even late in the evening on Friday. His last rites will be conducted with state honours at Dr. Rajkumar Punyabhoomi in Kanteerava Studio, next to his father and mother, on Sunday, the Government announced. Puneeth Rajkumar’s daughter is abroad and is expected to reach the city only by Saturday night, so the last rites will be held on Sunday, according to sources.

Chief Minister Basavaraj Bommai appealed for calm and peace through the two days. “We need to send him off with love and respect. I request everyone to pay their respects in peace,” he said.

Mumbai Police arrests brother of a film producer, on charges of inappropriately touching a struggling actress – Times of India

Kartikeya & Lohitha tie the knot: Check out inside pictures