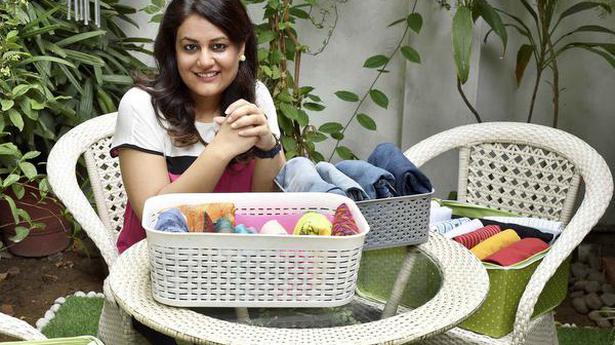 With Deepavali around the corner, professional clutter busters are busier than ever, teaching people how to let go, and transforming homes, one wardrobe at a time

Letting go is hard. No wonder Gayatri Gandhi sometimes finds herself in a tug of war with her clients, trying to make them get rid of possessions that do not serve them any more. This could be anything from an empty box of detergent to rusted kadais that are half a century old, says Gayatri, a professional organiser and India’s first certified KonMari consultant.

Gayatri has trained to professionally organise homes using the KonMari method propagated by Japanese organising consultant, author and host Marie Kondo (who first became famous for her book The Life-Changing Magic of Tidying Up in 2011). She launched Joy Factory in 2017 to help people “detach and discard” items they no longer need.

“The level of attachment people have with their items is too much,” she says, discussing the most challenging aspect of her job over a call from Delhi, where she is based. “They have 100 reasons as to why they should keep an item,” she laughs.

“As Indians we get attached to our belongings and see decluttering as a waste of money. Counselling the client is the hardest task. This is why before I start with any new client, I first do complimentary sessions to discuss hoarding and talk about how decluttering can benefit them,” says Prachi.

Inspired by the Netflix series Tidying up with Marie Kondo, Prachi says she decided to apply the principles to organise her clothes first, and then her home.

“I was amazed at how my guests visiting us felt peaceful in the house. My family never has to spend time looking for things as there is a home for everything in the house. Many of my friends asked for my help to organise their homes too and that is when I found my true calling as a consultant under Marie Kondo,” says Prachi who trained under Marie’s senior consultants in Los Angeles.

Marie herself conducted one session. “Before I could enrol, I had to organise my entire house as per Marie’s principle and share photos of the reorganisation. After the course I had to organise two homes and share detailed reports on that with the trainers. And finally before becoming a KonMari consultant in 2019, I had to write an exam and attend an interview,” she explains.

These consultants help clients get rid of unwanted things, organise their homes and label designated areas for belongings.

“It involves a bit of counselling as sometimes people hold on to hand-me-downs for emotional reasons. I always tell them to retain an item if it sparks joy, else give it away,” explains Gayatri, who trained with Marie in New York in 2017. “One of the most wonderful aspects was how 110 of us from different parts of the world had come together to find a common goal with such a simple act of decluttering and tidying,” she says.

“With people confined within four walls for the last year-and-a- half, they want to make their homes the best space. I was receiving two to three requests a week and started helping virtually. Not just homes, I also work with hotels and offices. The philosophy is the same.” Ironically, as someone who practises, and preaches, minimalism, Gayatri loves mess. “I love it because when I see it, I start imagining what it would look like once I am done,” she says, adding, “Often there are homes that look beautiful from the outside with a nice living room. Then, I see the private space and think, ‘Oh God, This is going to be a mammoth task’.”

When she launched in India, Gayatri says even her own family did not quite understand the concept. “Safai karne ja rahi hai? (Are you going clean a house?)” they would ask. And she would explain, it is decluttering not cleaning.

“I had to bring in a change in their mindset,” says Gayatri. Initially there was no market but fortunately, with OTTs playing a number of series on the subject, (Get Organized With The Home Edit, and more recently The Minimalists: Less is Now) the concept has been picking up.

“Now India has nearly 15-20 professional organisers,” says Gayatri, adding that she got her first client in December 2017 in Mumbai. It was a family of four. The lady of the house had just had her second child and needed help organising clothes. Since a lot of homes are smaller in Mumbai, she felt a space crunch. “We made her realise how she can let go of things of her first born to welcome the things of the second born. Once we told her how to fold clothes, she was so fascinated to see how much space she could save. Four months later, she sent pictures of how she had changed all her shelves to drawers as the latter is more conducive to the KonMari style of folding,” explains Gayatri, who now flies across the country working with clients, transforming their homes.

With Deepavali round the corner, Chennai-based Service Square has seen an uptake in requests for decluttering. Started by Babu Vincent in 2000, Service Square initially offered 150 plus concierge services for 50,000 employees of different companies, but since 2010, its focus has been on providing cleaning services. Early this year, he introduced decluttering services, after he himself embarked on a journey of minimalism. He read books on the topic by authors like Joshua Becker and Marie Kondo. For Babu it was not just physical decluttering but also mental and digital. “According to the Pareto principle, 20% of the most important things give us 80% of the results. It is a vital few and trivial many,” he says.

Over the years Babu noticed that even though people repeatedly got their homes cleaned, they did not stay that way because of the clutter. “If people really want to keep their homes neat and organised, they need to declutter. Then the place remains tidy for at least six to seven months,” he says, adding that his clientele consists of executives from Chennai, in the 30-to-50 age bracket.

Decluttering takes time: the process can take anywhere between six hours to a few days. Expect to get rid of anything from 30% to 50% of your belongings to create wardrobes and cupboards that are more compact, and functional. Sometimes it can also be a 12-hour shift at a stretch. The prices vary depending on the size and space, with some starting at ₹3,000 for an hour, while some charge a fixed amount for the whole process. 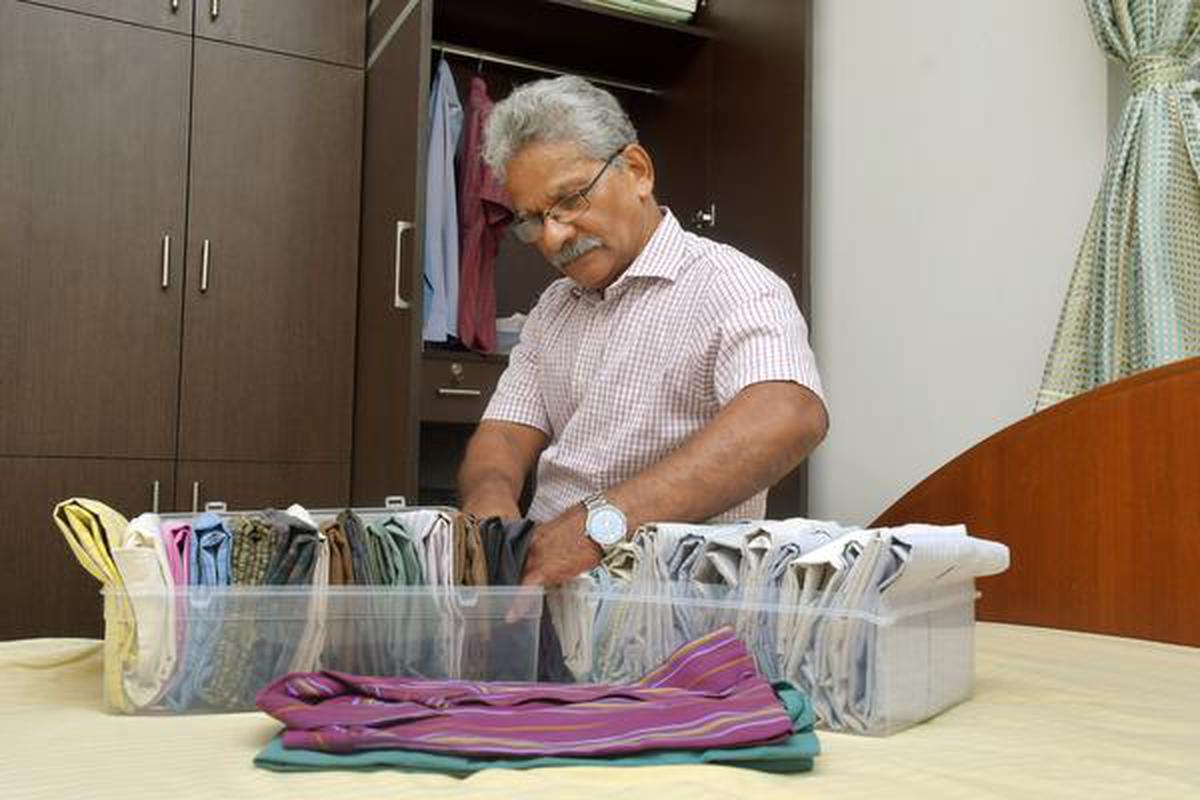 Other than the aesthetic appeal, decluttering has several other benefits. A lot of the things discarded in good condition are sent to charities. “It is a humbling experience when clients truly experience changes in their quality of life like sleeping better or have more time for their hobbies, or even cooking a variety of food,” says Prachi.

For Geetha Prasanna, a client of Prachi’s, the whole process of letting go has made her feel lighter.

“I was a bit ashamed of my clutter but Prachi never made me feel bad about it,” says 61-year-old Geetha, who has still managed to maintain the house as Prachi arranged it almost two years back. She follows the tweaks, advice and methods shared by the professional organiser. “I had too many saris and Prachi asked me to keep what I love and give away what I don’t use. To begin with, just the act of donating those saris made me feel good,” says Geetha from Bengaluru. It is not like I am clueless when it comes to cleaning or organising but Prachi arranged things in ways that I would never have thought of. Now there is so much space; sometimes I think what Prachi would have done and apply her principles. During the process, I found so many things that were missing for months,” laughs Geetha. Now, her specific kitchen implements are neatly laid out in a drawer, her books are stacked a certain way, and even her petticoats are arranged in a colour-coded manner.

Clutter competes for attention. Something as simple as searching for car keys can be stressful when in a hurry. Which is why, decluttering and organising can have a deep impact on our mental and physical state, says Gayatri. As she consults a spate of new clients approaching her to help organise their homes for Deepavali, she explains to them the benefits of decluttering. “It lets you focus on tasks that you want to accomplish. It is a way to control your surroundings. When we take a positive action like organising or decluttering a cupboard or a shelf, we feel more in charge and that is very reassuring,” says Gayatri.

Only Double-Vaccinated To Get Chennai Train Tickets From Monday

Meet the 79-year-old from Chennai who followed her passion a decade ago, and now makes your in-flight biryani