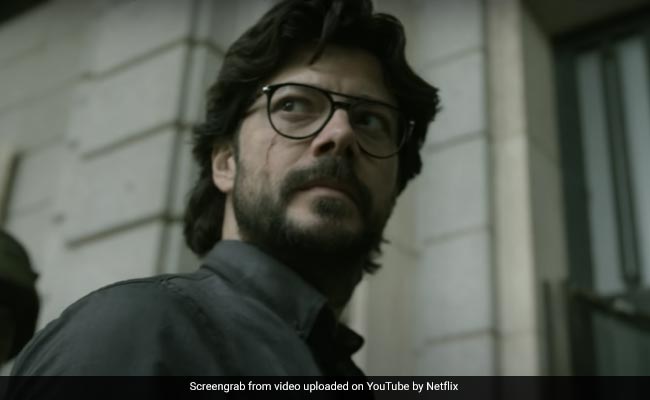 The Professor in a still from Money Heist 5 Volume 2.(courtesy: youtube)

You are our faith; when all else fails, we have you: this is what Tokyo, who is still around as a voice and in spirit, says to the Professor in an emotionally-charged and beautifully written flashback sequence in the penultimate episode of Money Heist Season 5 Volume 2. Fans of the Netflix series, one of the most-watched shows in the streamer’s history, would know exactly why she feels the way she does and how her sentiment echoes that of everyone in the gang – and the audience.

The above scene and the deceased character’s summation of her gang’s relationship with the mastermind of the Bank of Spain heist – you are a master of illusion, Tokyo says – define not just who the Professor is, but they also tell us who these thieves are even as their confidence in the leader begins to wear thin when hope begins to recede and all escape chutes seem blocked.

The Professor, in the pre-climactic mental and emotional churn, emphasises the ‘illusory’ nature of gold as a national reserve and an index of economic well-being. Robbery is rebellion for this gang of thieves that believes that the wealth of a nation does not belong to the politicians and the banks but to the people. Because it addresses issues that are easy to relate to, the show’s very specifically Spanish inflections do not appear remote at all, which explains why Money Heist is such a huge global phenomenon.

Money Heist signs off in style, holding its exhilarating course right until the bitter end, which, like everything else that has gone before, packs a punch and delivers a massive, scintillating surprise. The end is especially sweet because it marks the culmination of a story in which the key figures have never had a smooth ride.

Pressure mounts on the gang not only from the army and the police but also from a duo of thieves who turn the tables on them. A few among them begin to feel the heat and the wheels begin come off the operation

The final showdown between Sergio Marquina alias the Professor (Alvaro Morte) and Colonel Luis Tamayo (Fernando Cayo), tasked with ending the heist and securing the gold in the Bank of Spain, centres on mind games that raise the stakes and take a toll on a few of the gang members, one of whom comes close to breaking away and endangering all the others.

Continuing with the technique that rests on scenes within scenes rolling into and out of each other to document the long planning process preceding and during the two heists depicted in the show and track the character arcs and back stories, the last part of the long-running series does not flag one bit in the run-up to a dramatic denouement.

One of the high points of the Money Heist finale is the common ground that emerges between dismissed policewoman Alicia Sierra (Najwa Nimri), now a mother of an infant girl, and the Professor. From pointing guns at each other, the two are forced to play on the same side. But it isn’t an easy truce. “We will never be friends…” says Alicia. “It is a marriage of convenience.”

Amid all the melodrama – the Professor’s terminally ill elder brother Berlin (Pedro Alonso) gets his share by way of the story of his wife Tatiana (Diana Gomez) and his whizkid son Rafael (Patrick Criad0) – the relationships between the characters are layered and marked by intrigue.

Money Heist a show that does not merely thrill. It also offers insights into humanity, life and the ways of capitalism in a world in the grip of a collective consumerist frenzy. There is enough going in the finale, the focus of which is principally on the gang’s efforts to melt the 90 tonnes of gold in the Bank of Spain’s vault and send it out, for it not to feel stretched or gratuitous in any way.

It isn’t just danger, there is a lot of grief and inter-personal misgivings that the gang of thieves has to deal with as their journey nears its end, with all the ups and downs and twists and turns that has driven their daring robbery bid up until this point. One of the gang members has a near-meltdown: she hears voices and has visions that threaten to drive her over the edge.

Tokyo (Ursula Corbero) died at the end of Part 1 of Season 5. Young Rio (Miguel Herran) is angry and inconsolable. The others, too, are on edge, as Colonel Tamayo intensifies his efforts to bring the Professor and his group to book.

Tokyo is dead but we still hear her voice. She comes in at crucial points, like she has done all through Money Heist, to articulate her perspective on what is unfolding on the screen. Her POV is obviously a means of contextualising the ongoing heist, the years of planning and their repercussions on the thieves as individuals and as a group. By persisting with it as the show’s central storytelling device, Money Heist asserts Tokyo’s importance to the plot, to the world that it is set, in and to the fan base of the series.

At one point in Episode 8, when the thieves have achieved an impossible task that brings them a significant step closer to success, Tokyo’s comment takes that turning point beyond the moment and gives it universal and timeless resonance. “That accomplishment was a message of hope to the world,” she says.

Purely escapist in essence but always much more than a mere heist thriller, the audacious series created by Alex Pina loses none of its steam as it wraps up. So, the thieves who had the whole world eating out of their hands get the send0ff they deserve.

The finale of Money Heist– the last five episodes of Season 5, which landed on Netflix on Friday, arriving three months to the day after the first five chapters – is as consistently twisty and gripping as anything that the thriller had hitherto delivered.

Unsurprisingly, there isn’t a dull moment here: it is once again all vim and vigour and a synthesis of style and substance. It delivers the sort of relentless adrenaline rush that does not let you take your eyes off the screen for a second.