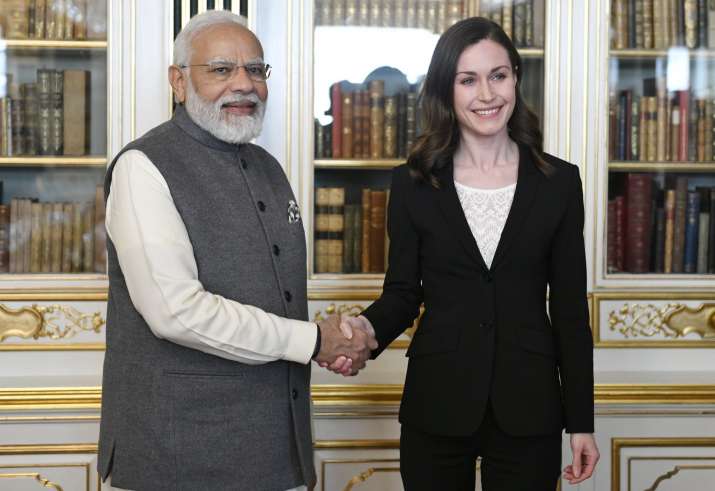 Prime Minister Narendra Modi on Wednesday met Finland counterpart Sanna Marin in Copenhagen, Denmark on the sidelines of India-Nordic Summit. PM Modi is on a 3-nation Europe visit. His next stop will be France.

Sharing about his interaction with Sanna Marin, PM Modi tweeted, “Meeting was very fruitful. There is immense potential in expanding the India-Finland digital partnership, trade partnership and investment linkages. We also discussed ways to deepen cultural ties between our nations.”

Who is Sanna Marin, the youngest Prime Minister in Finnish history

Sanna Marin took oath as Finland Prime Minister in December 2019, she was 34 years old then, became the youngest person to hold the office in Finnish history. Sanna is the 46th Prime Minister of Finland, in office since December 10, 2019.

A member of the Social Democratic Party (SDP), Sanna has been a member of the Parliament since 2015. She was also the Minister of Transport and Communications from 6 June 2019 to 10 December 2019.

According to reports, both India and Finland expressed satisfaction at the progress made in the implementation of the outcomes of the bilateral virtual summit held on March 16, 2021, MEA said.

India and Finland noted areas like sustainability, digitalization and cooperation in science and education were important pillars of their partnership.

Further, both the countries discusse opportunities to expand cooperation in the fields of new and emerging technologies like AI, quantum computing, future mobile technologies, clean technologies, smart grids among other issues.

When did Middle East and Viking-age Scandinavia Form Trade Links? A Study Finds Out