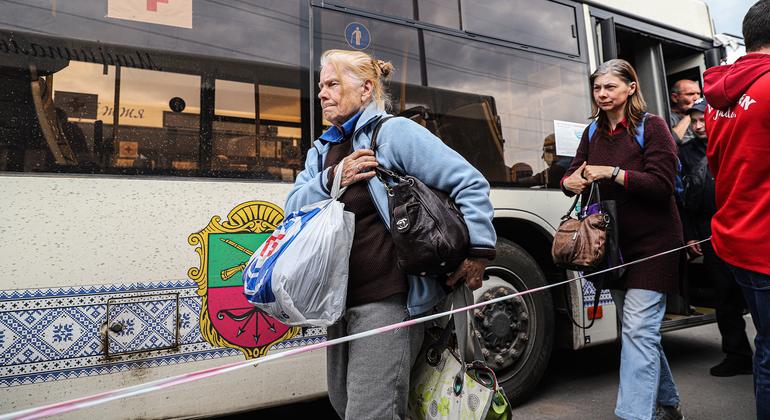 The alert from UN-appointed independent rights experts, including the UN Special Rapporteur on freedom of expression, cited “numerous reports” that journalists have been “targeted, tortured, kidnapped, attacked and killed, or refused safe passage” from cities and regions under siege”.

Latest UN data indicates that seven journalists have been confirmed killed in Ukraine since the Russian invasion on 24 February; the last time so many media professionals lost their lives in Ukraine, was in 2014, when Russia annexed Crimea.

Russia’s war against Ukraine has been made easier by the “silencing of critical voices…over a prolonged period of time”, the rights experts maintained, while pointing to the blocking of social media platforms and news websites in Russia, and the disruption of foreign media services.

Equally concerning was Moscow’s “massive labelling” of independent media as “foreign agents”, the experts said, before denouncing new Russian legislation that threatens 15-year jail terms to journalists “for spreading ‘fake’ information about the war in Ukraine”, questioning the so-called special military operation in Ukraine, “or even mentioning the word ‘war’”.

They added: “We deplore the systematic crackdown on political opponents, independent journalists and the media, human rights activists, protesters and many others opposing the Russian government’s actions. All these measures amount to the creation of a state monopoly on information in blatant violation of Russia’s international obligations.”

After condemning Russia’s alleged use of “propaganda for war” against Ukraine, the rights experts maintained that disinformation was also being spread about Ukraine in Russian State-owned media.

But they rejected the European Union’s recent decision to ban two Russian media companies as “disproportionate”, adding that this move had been used “as a pretext…for (the) additional closure of independent media outlets” in Russia.

“Promoting access to diverse and verifiable information, including ensuring access to free, independent and pluralistic media, is a more effective response to disinformation,” they said.

“We call on the Russian government to fully implement its international human rights obligations, including by respecting, promoting and protecting the freedom to seek, receive and impart information regardless of frontiers, and by ensuring a safe working environment for independent media, journalists and civil society actors.”

Within Ukraine, the rights experts also warned that the possibility of cyberattacks against Ukrainian media and internet infrastructure by Russian forces was deeply worrying, in a joint statement with the African Commission of Human Rights, the Inter-American Commission for Human Rights and the Organization for Security and Co-operation (OSCE) in Europe.

During armed conflict, journalists must be treated as civilians and any attempt on their lives constitutes a war crime, the rights experts insisted, adding that that States have a “duty and obligation” respect international humanitarian law.

Special Procedures is the general name of the Council’s independent fact-finding and monitoring mechanisms that address specific country situations or thematic issues in all parts of the world.

Experts work on a voluntary basis as Independent Experts or Special Rapporteurs; they are not UN staff and do not receive a salary for their work.